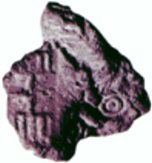 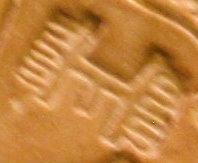 The Proto-Palatian clay seal fragment HM 992 (first photo from left) shows a single symbol identical to Phaistos Disk glyph 21 (second photo from left). According to Pavol Hnila it was excavated from the Phaistos palace in a secured context by Doro Levi in 1955, i.e. 47 years  after the discovery of the Phaistos disk. This not only proves the disk’s authenticity but also determines that it represented text.

The third photo is that of a religious symbol of the African Dogon tribe. The forth photo is that of an archeological artifact(signet) from Turkmenistan that contains the so-called “counterbalancing” Epsilon symbol. The fifth photo is from the throne of Minos at Knossos where we see a curved form of this same symbol. The sixth and last photo is from the controversial Roswell I-beam video. This counterbalancing Epsilon symbol is actually the ancient Hellenic Ksi (Ξ) letter. But in ancient Crete according the expert in Hellenic epigraphics, Margherita Guarducci, this symbol represented the Zeta (Z) letter. 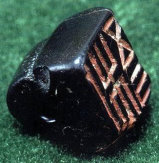 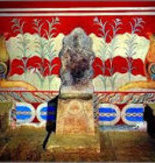 After decoding the Phaistos disk and adopting Ephi Polygiannaki's phonetic value for the "comb" hieroglyph we can interpret the seal fragment HM 992 as representing the symbol of divinity. It’s phonetic value from the Phaistos disk is si(ΣΙ). The ancient Hellenic word for God was Theos (ΘΕΟΣ).  But in the Aeolic dialect the word was Sios(ΣΙΟΣ). This means that this hieroglyphic symbol represented the first syllable of the word sios which meant God. For this reason this symbol can stand on its own – just like it has been found on this seal. This is another indication that the Phaistos Disk decoding we propose is correct.